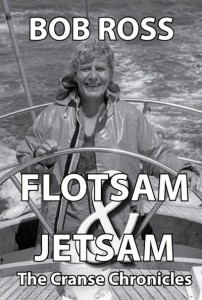 Throughout the pages of Bob Ross’s new book “Flotsam and Jetsam – The Cranse Chronicles”, several characters appear over and over again. One of them is Ben Lexcen the designer of Australia II that took the America’s Cup from the USA for the first time.

In early 1977 Bob Ross visited Yanchep, north of Perth to watch some of the trials between the new Ben Lexcen/Johan Valentijn America’s Cup challenger Australia and Alan Bond’s 1974 challenger Southern Cross, which was designed by Lexcen (at that time Bob Miller before he changed his name).

“Australia has a tiny hull, big rig, is lively in the lightest winds, manoeuvrable, accelerates quickly, stable in a moderate-fresh breeze and has a very low pitching moment. Over the two days racing I watched the new yacht win every start and every race against Southern Cross.

The whole operation at Yanchep is much more open-handed and relaxed than in 1974 when I hid in the bushes and aboard a crayfishing boat to watch Southern Cross’ early sailing and had furtive meetings in the evenings with Bob Miller.

Access this time is unlimited and Bob, now Ben, even invites me aboard Southern Cross for the day’s sailing against Australia: “Come with us, we’ve only got 13 today.” 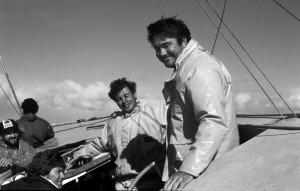 Photo: Ben Lexcen (right) and Ron Packer share a laugh on the eventful sail with Benny and the Jets off Yanchep in 1977

The crew on the warm-up boat calls itself “Benny and the Jets” after the Elton John hit of the time. “The Jets” are mostly youngsters eager to learn, sights set on the next challenge or gathering experience for big-yacht ocean racing. With as many as five them at times fighting to do the same job, sailing with them is entertaining.

Australia rolls us over quite easily in the second race, really fast to windward in 10 to 12 knots. Then her crew has problems with the twin-grooved headfoil while trying to change genoas as the wind increases over 15 and loses to us.

Then Benny is displeased with The Jet manning the spinnaker pole topping lift. “If you don’t get your head up out of that hatch and have a look next time you have to lift that pole, I’ll come up there and knock it off your shoulders,” he says, sounding just like the old Bob Miller. We return to the harbour for lunch.
We race once more. This time we start ahead and to leeward in about eight knots. Within 400 yards Australia sails straight over the top of us. We throw a few tacks, they cover and keep going away, vastly superior.

Benny mutters: “I’m not really aggressive today; I’ve taken too many blood pressure pills.” The Jet manning the topping lift might not agree.

We cannot make any impression on Australia, even though we cheat and bear away 200 yards short of the windward mark. Then Benny tries to put The Jets through a spinnaker gybe/set that ends in a gigantic mess.”

“Around 1970, when Alan Bond’s yachting ambitions extended only to being a heavy in ocean racing, he took Apollo to America for the Newport-Bermuda race.

One of the American Twelve Metres was moored on the opposite side of the dock to Apollo and as any yachtsman would, Alan went over to have a “sticky beak”.

In those days the Americans were paranoid about “industrial espionage” and tight security surrounded their America’s Cup boats. So the crew boss of the Twelve popped out of the forehatch and gave Bondy a mouthful.

This so angered Apollo’s designer Ben Lexcen, who happened to be on Apollo at the time, that he spouted back at the US heavy something sounding like: “I’ll tell you what you can do with the America’s Cup. We are going to come back here one day with a super yacht that will beat the pants off you.

“Then we are going to get your America’s Cup and have a steam roller run over it again and again outside the New York Yacht Club.”

Roll on the America’s Cup Tray.

[The above story moved into America’s Cup folklore so when Alan Bond’s Lexcen-designed Australia II did win the Cup in 1983, the New York YC presented Lexcen with the Tray, a battered Chrysler hub cap.]

“The day after the Westpac series, a warm-up for the Australian challengers on Port Phillip for the 1983 America’s Cup, I am sitting below in the “sewer” of Australia II and feeling distinctly nervous.

I am trying for the fourth day in a row to interview designer Ben Lexcen on what he thinks of the form of his two new Twelves in the Westpac series. Australia II the previous day had won the final race over a full 24.5n mile America’s Cup course. In their four meetings during the previous heats over half-size America’s Cup courses the score was two-all. I am keen to get Ben’s reaction to the result.

At last I have cornered the mercurial Benny but he is pre-occupied with a peculiar problem. The hydraulic ram that tensions Australia II’s rig by lifting the mast step has blown a seal, leaving the mast jammed in the fully-tensioned position. The mast has to come out so that the boat can be packed up for the USA. There is no way of reaching the faulty ram which is enclosed in the mast.

Somehow it seems to be the wrong time to be questioning him about the sophisticated design and engineering features – including a revolutionary and still secret keel – of what has been hailed as the most potent and best-prepared challenger of all time.

But as Ben hammers, I persist. How did he feel about the outcome of the Westpac series? “It confirms my confidence in this boat but the other one is better than I thought it would be.”

When would he show the world the tricky keel? “We are even going to hide it in America, keep a bag around it to keep the opposition worrying about it. You see, even if they knew what it is like, they wouldn’t know if we had changed it.”

In performance terms, what was it doing for the boat? “The boat goes faster, it does not go sideways as much; it allows the boat to sail more upright.”

Read these and many more stories from the America’s Cup, the Sydney-Hobart, the Admiral’s Cup, and countless more from the great yacht races of the 1970s and 1980s in Bob Ross’s new book.

Available on Amazon and for the Kindle. All the links and more excerpts are here.

About the author: Bob Ross has been employed in yachting media for most of his life, and in 1976 he co-founded Australian Sailing magazine, along with Ken McLachlan, which grew to become the leading competitive sailing magazine in Australia. When Bob was sailing correspondent for the Sydney Morning Herald, he also wrote for the Sydney Sun, but under the pseudonym of Bob Cranse. The name followed him to Australian Sailing where his irreverent column, By the Way, became a regular highlight. Bob is now retired, but still writes the column. Cranse’s column is now in its 40th year.

About the book: For more than 30 years, a collection of characters, curious situations and humorous bits and pieces has washed across the desk of sailing magazine editor and columnist Bob Ross and published in Australian Sailing magazine in Bob Cranse’s By the Way column. Running since 1976, now the best of them have been rescued and collected together into Flotsam and Jetsam: The Cranse Chronicles. The 152 page book is available through Amazon as well as an e-book for Kindle.

Published by Boatswain Books it is available in most countries through Amazon channels for £10, €13 or $15. Trade enquiries welcome.