An Eye for Innovation – Biography of Austin Farrar republished 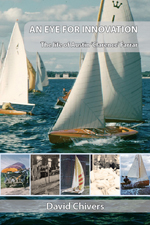 Austin ‘Clarence’ Farrar saw an opportunity for innovation in almost everything. Although not a well-known public figure, he was known and respected by those who met him and worked with him.

His work on dinghy design and building, and subsequently as one of the leading sailmakers of his day, stays with us today. His work on the design of spinnakers and wing rigs is still current and many of today’s sailmakers learnt the trade under Austin.

David Chivers’ fascinating biography of Austin Farrar ‘An Eye for Innovation’ was first published in 2007, but has been out of print for a number of years. It has now been republished under a new cover and new format and is available through Amazon across all its distribution platforms.

The launch of the book coincided with a presentation at the Royal Harwich Yacht Club, where he was a member and owned and operated the Woolverstone Shipyard for many years. On Sunday 14 February a watch that Sir William Burton (who presented the Burton Cup to the National 12 class and also helmed Sir Thomas Lipton’s Shamrock IV in the 1920 America’s Cup) had given to Austin Farrar, along with the medal given to Austin by the Royal Institute of Naval Architects for “Outstanding contribution over many years to the design of rigs, sails and high performance racing craft”, were presented to club as a lasting memorial to their famous member.

Austin Farrar died in 2004 but the sense of ownership of his legacy, as well as fondness for his memory, was palpable in the room as the gathering of many of his old friends and former colleagues told many anecdotes and tall stories about him. It was a celebration of his life and sense of humour, his innovation and his often brazen ideas, including using a milking machine to remove moisture from a yacht’s sandwich construction, dropping hand grenades in the water to kill toredo worm in the Woolverstone pier and torturing his passengers in his 1924 Bentley.

Coming from a family where invention was encouraged, Austin was fortunate to be yacht and dinghy racing in the heyday of the 1930s. He worked on the design of cutting edge offshore racers and developed torpedo nets to guard ships during the war. He was one of the most successful designers of International 14s of all time, including the famous four-time winner of the Prince of Wales Cup, Windsprite, he invented the pulpit now seen on most modern yachts, he built one of the first ever wing sails way back in 1949. He was also one of the early proponents of cold moulding, building his 14s and many canoes in this way.

Later he founded Seahorse Sails, which became synonymous with excellence and design development.

‘An Eye for Innovation’ tells the story of a fascinating man and is a must read for anyone interested in the history of yacht and sail design and maritime innovation.

Published by Boatswain Books (boatswainbooks.uk) it is available through all Amazon channels for £10, £13 or $15.