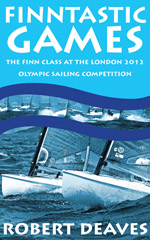 Finntastic Games recounts the enthralling battle of the titans of the sailing world in the Finn class at the 2012 Olympic Games.

Over the course of the Olympics the Finn class released a series of press releases consisting of previews, interviews, race reports and wraps, all telling the sailors stories on and off the water. These press releases have been edited and compiled to provide a seamless story of the Finn class event at the Olympics, together with many great photos from before and during the event.

The London 2012 Olympic Sailing Competition at Weymouth & Portland was a brilliant showcase for the sport of sailing. For many the Finn class provided the highlight of the regatta with Jonas Hogh-Christensen and Ben Ainslie’s epic battle – culminating in Ainslie’s record breaking fifth Olympic medal and fourth consecutive gold – making news across the globe.

The book is available through Amazon.com and the European Amazon sites (UK, Germany, France, Spain and Italy). Click on the links below to go direct to the order page.