Samples from Flotsam and Jetsam

It’s amazing what you can pick up at yacht club bars besides poundage around the waistline. As well as good advice on everything to do with boats, women and dogs, there is the occasional anecdote that is printable. “And so,” says the ocean racing refugee now in the Soling class, “we are chasing the stern light of this other yacht up the coast. Knowing the boat ahead is well navigated, the rest of the watch retires below out of the cold to enjoy a cuppa leaving the captain at the helm.

“What we don’t know is the other boat turns off its navigation lights and tacks out to sea. Our skipper calls down: ‘We’re catching him; his stern light is much bigger.’ I take a look and in the stern light and can see a lady washing the dishes. So we crash tack and just miss the rocks under the kitchen window.”

I was discussing the case of the 18-footer for’ard hand who dived overboard after a disagreement with his skipper with Ken Beashel and Beasho, as usual, came up with one about as good if not better:

Years ago he was sailing as a bailer boy on an 18, struggling along in a big breeze, when they came upon a competitor capsized and in those grand old days when buoyancy was considered to be cissy, hopelessly swamped.

The skipper eyed the bodies in the water and hissed to the biggest one: “Want a ride in?” They picked up the heavyweight and with his help sailed stiff as a church to the finish, no questions asked. 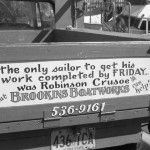 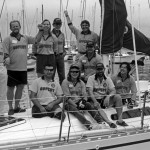 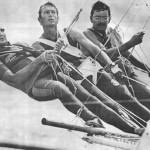 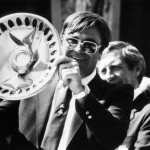 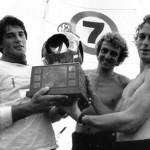 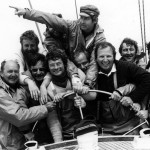 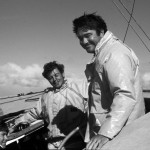 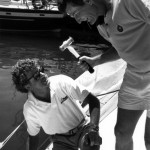 A few years have passed since I sailed a Hobart race with Kevin Shephard whose jokes were ruled to be so rancid he was allowed only five minutes each hour to tell them. His “It’s too loose Lautrec” for slack jib-luff or mainsail foot tension is one of his better funnies so you can see how desperate things became.

The man does not improve with age. I have just returned from a Sydney-Brisbane race with Sheppo, riddled in mind and body by bad puns. Our Czechoslovakian-born caterer George Mottle, who managed to produce European-style cuisine from a shoebox someone with a sense of humour christened a galley aboard John Biddlecombe’s Casablanca, became untypically angry one day when someone complained that 28 of the 30 sandwiches were salami. “Crossed Czech”, explained Sheppo.

One of the nicest things to happen to me on a visit to Melbourne was the chance to sit around a cosy pot-bellied wood stove in the Jolly Roger boatshed at Albert Park Lake and have a yarn with Bill Hooper, who has the sailing school there.

The Hoopers had been on the lake for 100 years and Bill’s son John and Buster, the successful 470 and Fireball combination, looked like carrying on the family tradition through another generation.

Bill has taught hundreds of people to sail, among them many who are well known today in sailing or business. Over the years he kept a card index on them all with frank comments on their progress and ability.

The index remained “strictly confidential” until a now-famous ex-pupil begged for a look at his card. Reluctantly, Bill searched the system and produced the yellowing card.

Its concluding line was, “Last lesson not paid for.”

Charles (Chas from Tas) Blundell, veteran international ocean racing professional and delivery skipper of yachts around Australia and throughout Asia, in 2009 was apprehended by the police in Sydney.

Chas, who had just completed a delivery voyage with a yacht to the CYCA in Rushcutters Bay, was on his way up the hill for his two-monthly haircut in Kings Cross when it happened.

That particular morning the local cops were very edgy following the brutal bashing with a brick and robbery of an off-duty policewoman. Two of them on patrol, one an Asian female, stopped Chas who was in his casual sailing gear including the Drum Reunion tracksuit top.

Where was he living? “Just got off a boat in Rushcutters Bay.”

Where’s your ID? His passport was on the boat. He did have two credit cards.

So they searched him. “What’s this?” The small bottle of green fluid with the label worn off contained eye drops, not drugs.

What’s this? The small jade figurine was an Asian good luck charm. “You should know, being Asian,” Chas volunteered cheekily to the female officer.

Where was he going? “To the Cross for a haircut. I always go there; it’s only ten dollars!”

Finally, he produced a crumpled E-ticket for a flight from Sydney to Hong Kong the following day, to pick up another yacht for delivery. That’s when the coppers began calling him “Sir” and let him go on his way.

What do you do with yourself while struggling the boring miles home after pulling out of an ocean race, except perhaps sticking pins into an effigy of the skipper or trying to find the hiding place for the rum.

Well you can organise little competitions, as did the crew of Casablanca dragging their tails homeward from a non-finish in the 1978 Montagu Island race.

It started, I think, with the remark about renowned Araldited-on helm holders: “When I heard Sheppo and Lawso were on the same watch, I thought the boat must have two steering wheels!”

A debate began on the pros and cons of giving everyone a steer and having a say in which way to go led to the big experiment. The whole crew of ten, except the stooge holding the camera, packed the helmsman’s cockpit and got a hand to the wheel. Is this a record? Available on cassette soon.

The 60th Hobart race in 2004 evoked memories of the first. First-fleeter Ray Richmond fired the starting cannon while John Gordon from Winston Churchill and Geoff Ruggles from Peter Luke’s Wayfarer crew were also honoured guests of the Cruising Yacht Club of Australia on start day.

Besides Rani, which after being listed as “missing” for four days emerged as winner of the first Sydney-Hobart race, Horizon featured in the headlines as “lost”.

Aboard her was the then 23-year-old Alan Payne, later to establish himself as Australia’s foremost designer of sound offshore yachts and of the outstanding America’s Cup challengers Gretel and Gretel II.

Sydney newspapers on the “disaster” chase, interviewed Alan’s parents who said they were not too concerned about Alan and the crew of Horizon, which also included 22-year-old Boy Messenger, another to make his mark in offshore racing.

Alan’s younger brother Bill Payne hitched a ride aboard the Catalina that each day patrolled the race course to report on the progress of the yachts. Bill had been a pilot on the Halifaxes with RAF Bomber Command in England and also had good contacts in the RAAF.

He said: “Geoff Nolan, an air force friend and I, were at a party at my parents’ place when we heard on the radio that a Catalina was to search for Rani and Horizon.

“I rang Rathmines (RAAF base) and they told me if we could catch the midnight train to Gosford, they would take us along.

“I wasn’t that concerned about Alan. It just seemed a good chance for a trip. The conditions by then were pretty calm. We flew around for a bit and checked most of the boats still at sea. We found Rani and that famous picture of her nearing the finish was taken from the Catalina. I think we found Horizon.”

The Catalina landed on the Derwent and motored up to a mooring especially laid by the Navy, below Government House. A naval whaler dinghy rowed out to pick them up, endangering the Catalina’s pontoons with its rowlocks.

They spent four days in Hobart, staying at the up-market Hadley’s hotel, touring up Mount Wellington and down to the Huon Valley.

“We met Alan when he came ashore at Battery Point. He said, “Good day” and seemed a bit surprised to see us. We also met up with Jack Earl and Bob Bull, who I knew, from Kathleen.

“It was a good, fun trip. We flew back with a crowd of 22 people on board including two WAAFs and a bag of lobsters. There were so many of us, Rathmines laid on another Catalina to fly us back to Rose Bay. Geoff Nolan and I just walked home.”

Alan Payne also flew home after a swift-thinking initiative. Boy Messenger recalled that with flights out of Hobart fully-booked, Alan went to the post office and filed a telegram to his parents: “Send telegram, mother seriously ill.”

That was enough to get Alan on the first plane out while Boy had to catch the train to Launceston, the ferry Taroona across Bass Strait and the train from Melbourne to Sydney.